An American flag would drape her husband’s coffin, testifying to his military service.

A belt buckle would adorn his body, honoring his work as a cattleman.

A slide show of photographs would flash onto the walls of the church her husband helped build, revealing his work in the movie industry and his love of family.

And a recording of the couple singing, “You’re My Best Friend,” would play, symbolizing their 40-year relationship.

She thought it was perfect.

God, she later recalled, did not.

There were things missing, God told her: the hard hat and vest, and the Tennessee Valley Authority group photograph of her husband and his two brothers among the hundreds of heavy equipment operators who had cleaned up the utility’s massive spill of toxic coal ash waste at its Kingston plant in 2008. 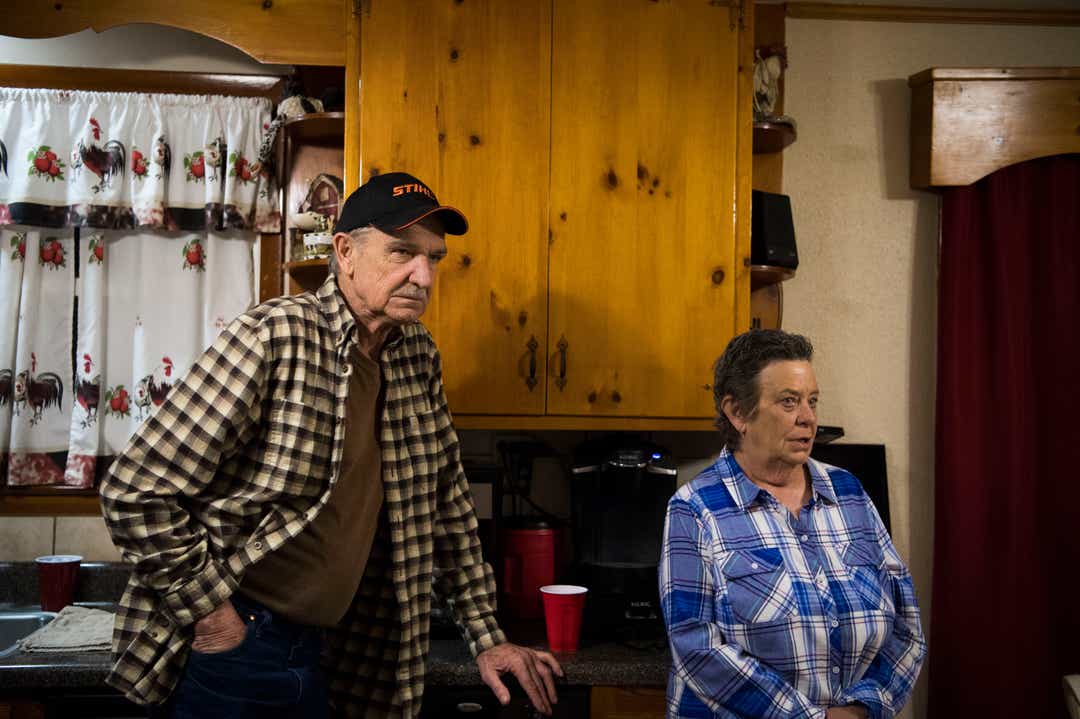 Johnnie Bledsoe believes TVA and its Kingston disaster cleanup contractor, Jacobs Engineering, failed to protect her husband and his fellow workers and misled them about the dangers of long-term exposure to toxic coal ash waste. She and her husband are among hundreds of Kingston disaster relief workers and relatives suing Jacobs in federal court, claiming the workers were sickened by the cleanup work.

“I argued with God,” she said.

But as mourners filed into Dante Baptist Church in Knoxville to memorialize Doug Bledsoe’s Aug. 12 death, there beside his coffin stood a coat rack – the hard hat perched on its top, the vest enshrouding its pole and the photograph pinned to the vest. 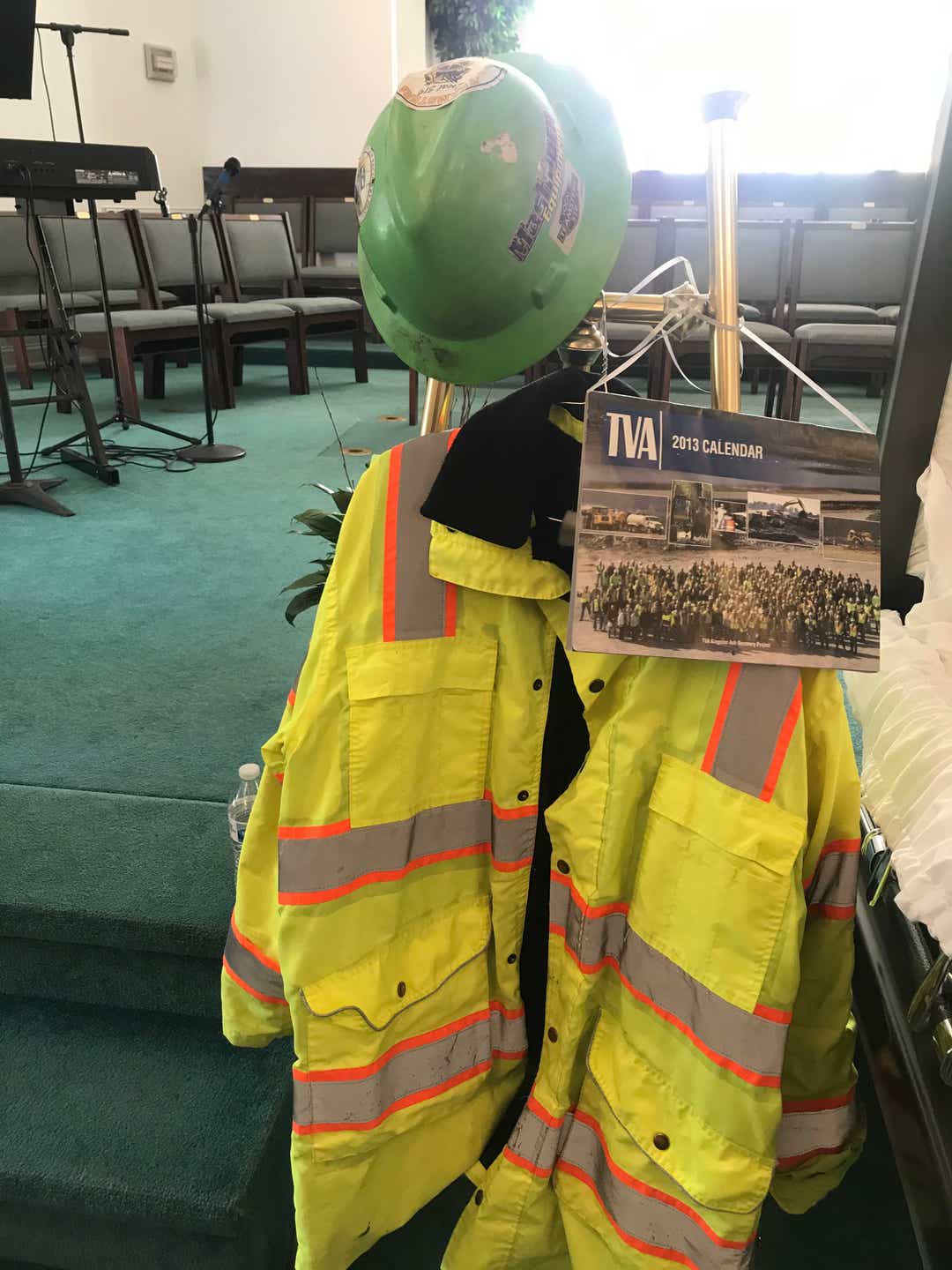 Her husband, Doug Bledsoe, is the 50th Kingston disaster relief worker who has died from illnesses that some workers and their families say are linked to exposure to the ingredients of coal ash waste since the seven-year cleanup of the nation’s largest coal ash spill ended.

TVA and contractor: Don’t blame us

Both TVA and Jacobs deny any role in any of the workers’ deaths or the sicknesses hundreds of other Kingston disaster relief workers say were caused by exposure during the cleanup to coal ash, including radioactive heavy metals dangerous to breathe.

TVA has refused to answer questions about the Kingston workers, citing the federal litigation against Jacobs. But the utility has publicly supported the firm and continues to do business with it.

Jacobs insists TVA give the firm special legal protection if anyone claimed to be sickened by coal ash exposure during the cleanup, an ongoing Knox News investigation has revealed. The indemnity agreement means TVA and its ratepayers could wind up paying Jacobs’ legal bills, including any damages awarded.

“There was extensive testing of water, soil and air at the Kingston Site in the immediate aftermath of the spill by a number of government agencies and companies, including the TVA, the Tennessee Department of Environment and Conservation, and the EPA,” Boutrous wrote in a statement.

In the first lawsuit by workers and their family members to make it to a trial, a U.S. District Court jury ruled in November 2018 that Jacobs breached its duty to protect the workers.

Jacobs earlier this year offered $10 million to settle that lawsuit if those workers would agree never to speak of the case again.

Jacobs’ attorneys have since filed several motions in a bid to persuade U.S. District Judge Tom Varlan to toss out the lawsuit before he sets a second jury trial in that same case.

A second jury will be asked to decide if the workers were sickened as a result of coal ash exposure and, if so, how much in damages should be awarded them.

TVA Chief Executive Officer Jeff Lyash, who was hired last year, has expressed sympathy for the workers, as has the TVA board of directors. Lyash and the board members, however, have turned away appeals from workers and their wives for help with medical care costs.

The Bledsoe brothers — Doug, Mike and Ron — grew up the sons of a Merchant Marine who moved his family to East Tennessee during World War II to work on the top secret mission to develop nuclear bombs.

Their dad, Leonard Bledsoe, also was a horseman and cattle wrangler. The brothers learned to ride horses and rope cattle and to master mechanical bulls. Later, they learned to drive tractor-trailers and operate giant earth-moving equipment. 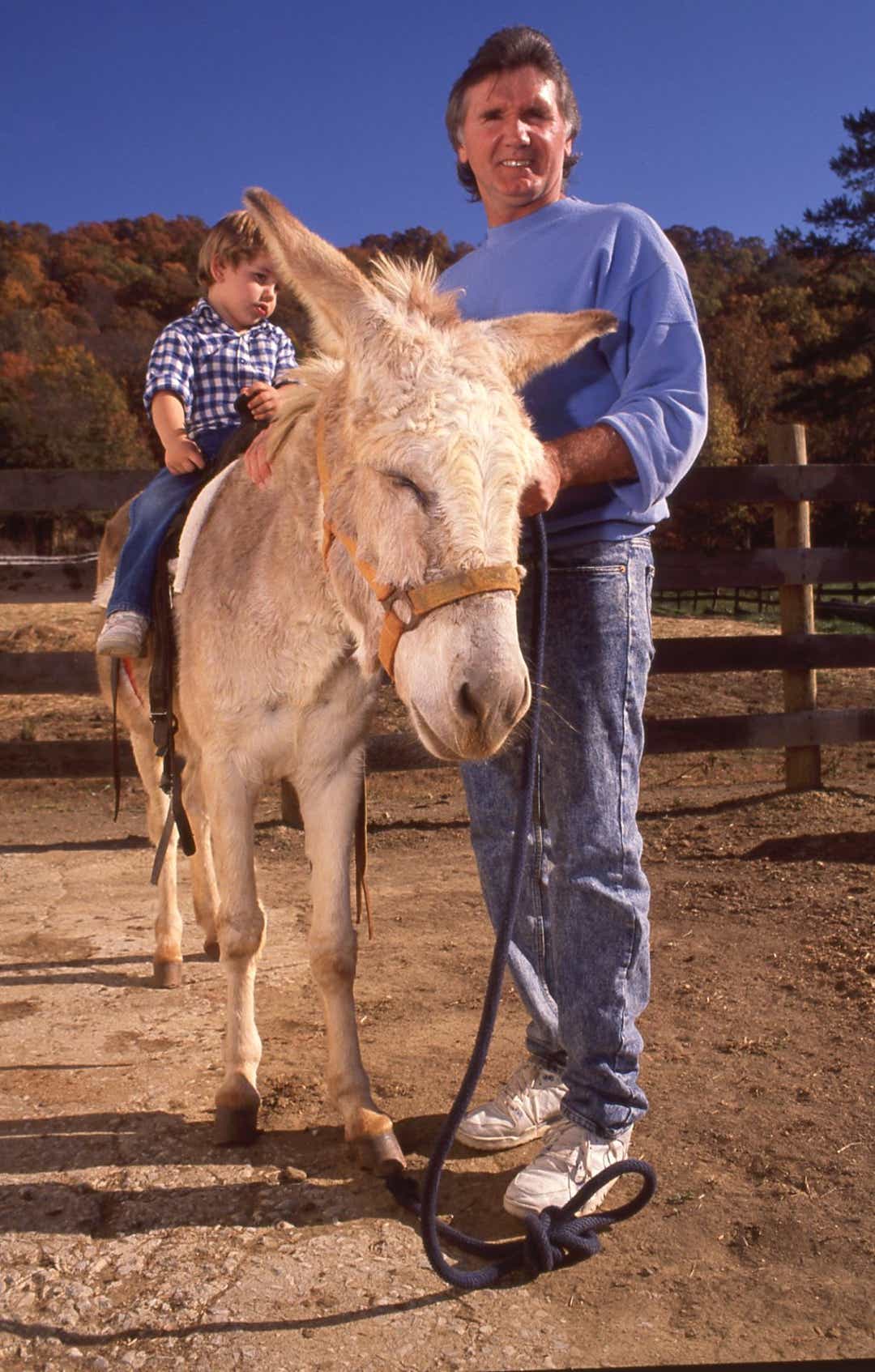 The Bledsoe brothers’ reputations as modern-day cowboys grew among local television commercial producers and eventually, in the 1970s, Hollywood came calling. The brothers spent years working on the sets of dozens of hit movies, such as “Coal Miner’s Daughter,” “A League of Their Own,” “The Outlaw Josey Wales,” “The Dollmaker” and “Air Force One.”

The brothers set up trailers for movie stars, meeting legends such as Burt Reynolds, Muhammad Ali, Ernest Borgnine and Rosie O’Donnell. They wrangled horses and cattle, served as stuntmen and even played bit characters in some of the films.

“Rosie O’Donnell got locked in her trailer one day, and I’m walking by and I hear this voice, ‘Ron, can you come unlock my door?’” Ron Bledsoe recalled, laughing.

By 2008, though, the economy was in a recession, and movie production work was leaving the United States. Mike and Ron Bledsoe were back in East Tennessee and in need of work when TVA’s coal ash pit at its Kingston plant gave way, spilling 7.3 million tons of the waste – the byproduct of burning coal to produce electricity – onto private property and into major waterways. Doug Bledsoe was finishing up a movie project.

When a labor union sounded a call for heavy equipment operators to clean up the spill, the brothers answered.

The Bledsoe brothers had no idea if the work at the Kingston disaster site would be dangerous. But, the men told Knox News in a series of interviews, they were certain TVA would protect them.

“I came off a movie and went down there,” Doug Bledsoe said in a 2018 interview. “(The brothers) were the only ones who could drive the articulators (a rotating excavation device). We knew a lot about coal. We knew nothing about coal ash.

“But every morning the porch (at the cleanup site) was lined with TVA people,” he said. “We trusted TVA.” 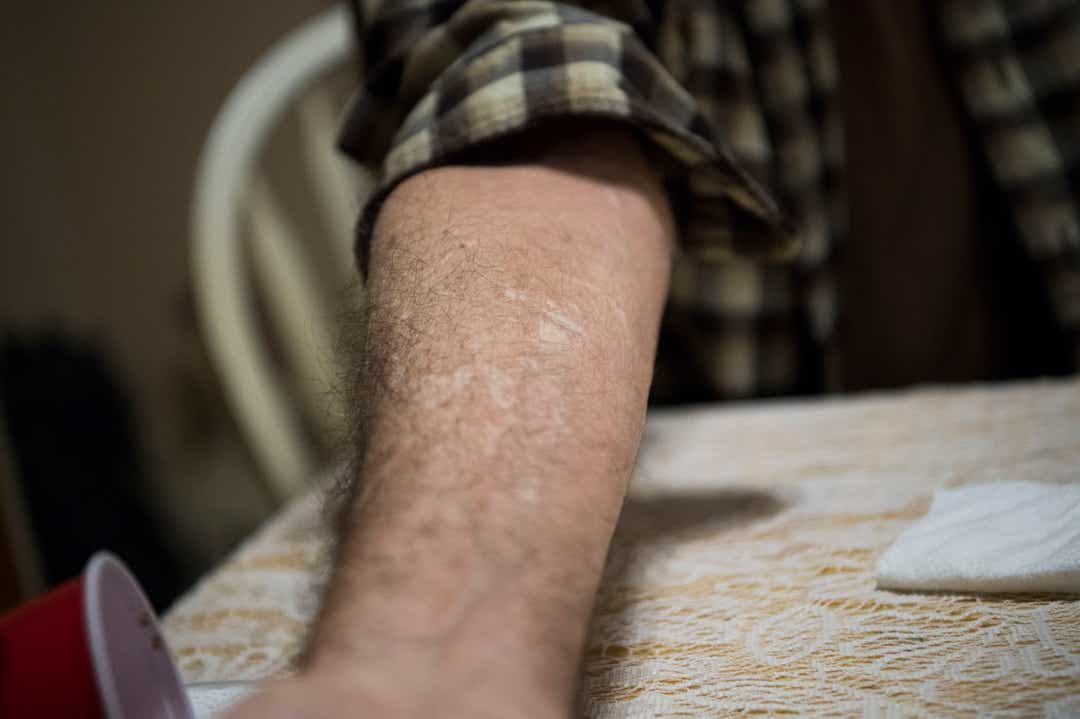 The brothers, like hundreds of other Kingston disaster workers, said they were assured by bosses on the cleanup site that coal ash waste was safe, not much more dangerous than working in mud.

“We were standing on it, eating,” Doug Bledsoe recalled. “The dust was horrible.”

He began to struggle to breathe.

“I just blamed it on sinuses,” he said. “I never did think a whole lot of it. I’ve always been a workaholic. I’d work 10 hours at Kingston and come home and work two more hours. I loved to work.”

Soon, though, all three brothers were sick, suffering from breathing ailments.

The Bledsoes, like dozens of other workers, began complaining about their working conditions and the ailments they were suffering, including skin rashes, nose bleeds, fainting spells, breathing difficulties, migraines and heart irregularities, Knox News’ ongoing probe shows.

But they kept working, they said, and trusting.

“You’re making $28 an hour, and you’ve got bills to pay and you’ve got a family — how are you going to quit that?” Doug Bledsoe said. “All the bosses said you could eat the stuff (coal ash), that it wouldn’t bother you.” 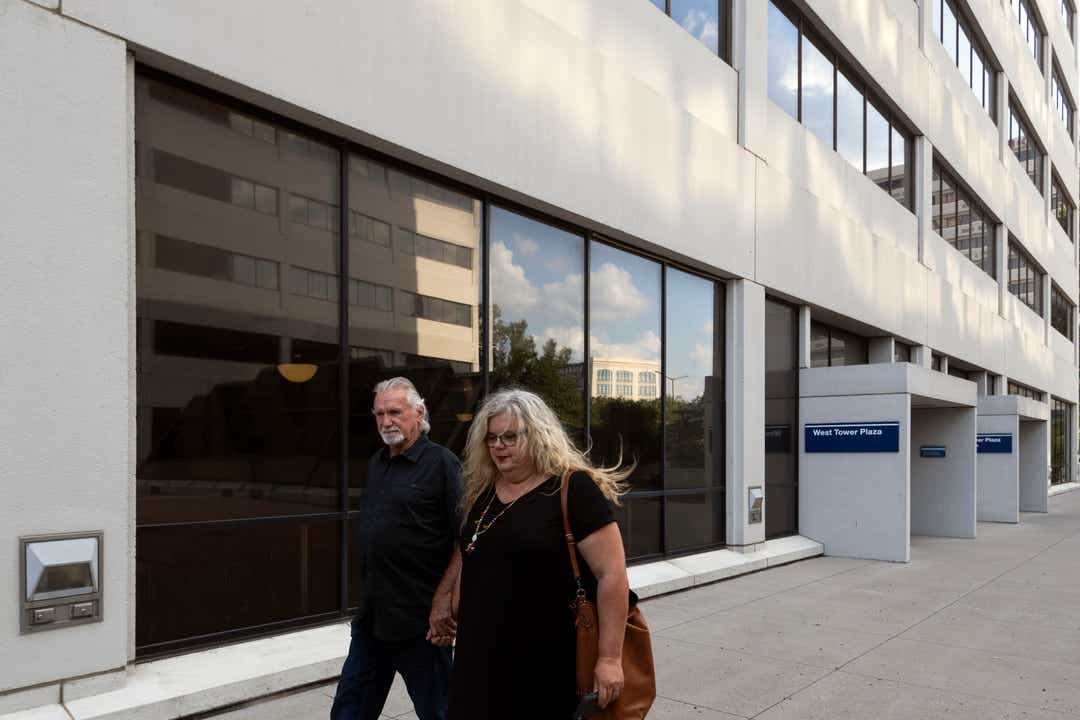 The brothers worked at the site, without respiratory protection, for more than three years. Each said they left because of the toll the work was taking on their bodies.

“When I went to work at (the) TVA (cleanup site), I was taking no medication,” Ron Bledsoe said. “Now, I’ve got 14 medicine bottles lined up.”

When she learned of her husband’s dual diagnoses, Johnnie Bledsoe said, “I could have passed out.

“I was prepared for the spot on the lungs (to be cancerous). When they came in and said he had a brain tumor, I was beside myself.”

She had just undergone months of breast cancer treatment and was awaiting her own prognosis. Doug Bledsoe blamed himself for his wife’s illness, noting he often tracked coal ash into their home. 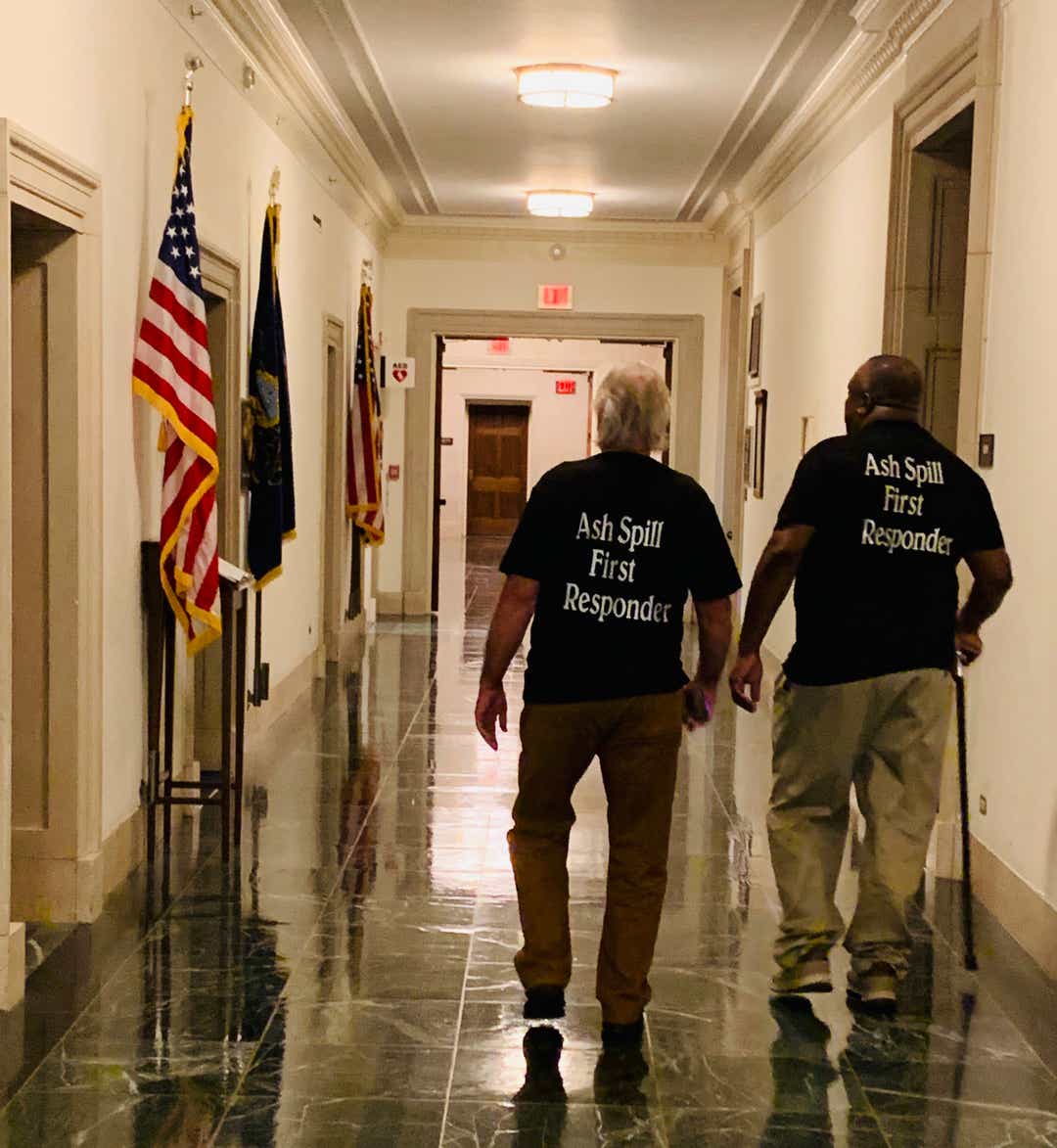 Knox News’ investigation has revealed Jacobs did not provide workers decontamination showers – as ordered by the Environmental Protection Agency.

“I kept thinking, ‘What if I’ve killed her?’” he said. “I met (Johnnie) when she was just a kid. … She’s my best friend. I’d rather be with her than anybody in the world. We’ve traveled all over this country together. We’ve worked together all our lives. … It was just getting to that time in our life when we could get out there, slow down and enjoy life.”

The Bledsoes received two calls in two days in late 2018 — one from a doctor who said Johnnie Bledsoe’s cancer was in remission and another who said her husband would be dead in two years.

“You can’t put a price on a man’s life,” Johnnie Bledsoe said. “But you can at least feel like a man’s life was not lost in vain. We’re going to keep fighting (in court). That’s what Doug wanted.”