Glenn Kirtley was a fan of Myrtle’s Chicken + Beer, even when the Market Square restaurant competed with his nearby businesses Soccer Taco and Not Watson’s.

All three restaurants are within three doors of each other, and Kirtley felt a responsibility to step in when it became clear Myrtle’s would not reopen.

Kirtley and his business partners plan to acquire rights to the Myrtle’s name and reopen a renovated version of the restaurant by the end of September.

Knox News reported in June that Myrtle’s on Kingston Pike has permanently closed. Signs for Taqueria La Herradura Express have popped up at the location in recent weeks.

Kirtley is not involved with the Kingston Pike location; he’s focused on Market Square. The business partners have a backup in case the rights cannot be acquired, but Kirtley said he’s confident everything will work out.

“Market Square has been a great place for us to do business for a long time and, I don’t want to say it was an emotional decision, but it probably was,” he told Knox News. “We need to do our part to see what we can do to keep that business alive and keep the square vibrant.”

A ‘more vibrant version’ of Myrtle’s

Kirtley, Ronald Houser and Marilyn Parham will be co-owners of the business at 13 Market Square, whether or not it’s Myrtle’s.

Kirtley told Knox News they already have occupied the space and are working toward a renovation.

“It probably won’t be the same,” he said. “I think it will be very similar. … That was a pretty old restaurant when it was Trio. I think in (Myrtle’s) efforts to get it converted quickly, they probably weren’t able to invest the time they would have liked to have to make some upgrades to the space.”

A lot of changes will be made — from the kitchen to the HVAC systems to interior design.

“I think it will be kind of a better, a little more vibrant version from an interior aesthetic,” Kirtley said. “We’re definitely changing lighting. There’s some brick walls that we are going to whitewash to kind of brighten the space up.”

Some new artwork could also help liven the space, which Kirtley called “a little cave-like.”

It doesn’t make sense during a pandemic to gut the building and start over, so the new owners plan to work with what’s in place.

Kirtley realizes Myrtle’s had an edge in Market Square; the downtown area does not have many options for fried chicken.

But that doesn’t mean the restaurant has to limit itself.

Kirtley expects between 60% and 70% of the menu to stay the same by bringing back some customer favorites. But the owners believe there’s room on the menu “for some things not coming off a chicken,” he said. 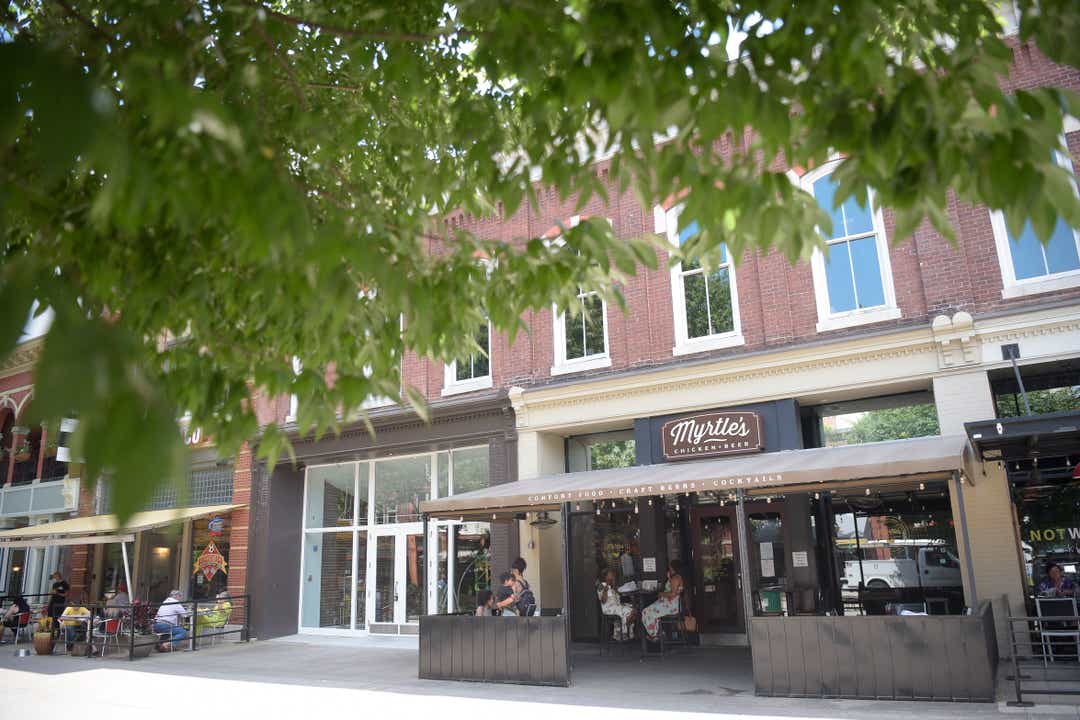 “We certainly want all the old customers to come back and feel at home, but I also think we have an opportunity to attract some new guests who maybe hadn’t tried it before,” Kirtley said. “We’re all competing for a share of stomach there, and we’ve got to maintain our edge wherever we can find it.”

The business will expand the beer offerings and explore craft cocktails to match the concept, he said.

Kirtley’s other businesses have tried to stay true to their normal hours, and he plans to do the same with Myrtle’s.

Customers should expect the restaurant to open early Saturday and Sunday for brunch. The restaurant could be open until 10 p.m. Sunday-Thursday and until 11 p.m. on Friday and Saturday.

Bringing ‘life to the square’

Myrtle’s has a patio, and Kirtley plans on using the new outdoor dining area in the center of Market Square.

Listen to this week’s episode

“I think that that’s a great opportunity to bring a little life to the square,” he said.

Kirtley is hiring like Myrtle’s is a new restaurant. Some former Myrtle’s employees were hired at Not Watson’s.

“It would certainly benefit us to get experienced team members back on board, especially those who already understand and believe in the concept,” he said.

Kirtley said the owners are planning to open by the end of September, expanding on the “solid concept” Myrtle’s already established.

“Hopefully Knoxville will continue to support downtown restaurants,” he said. “I know it’s a crazy time for everybody.”