“I’m tired of hearing racist comments, racist jokes. I’m tired of being told by people not of color that, ‘Hey man, watch out for this guy, he might be a little racist, man,’ but then it’s OK when he finds out I’m a football player.”

Smith was one of several Black student-athletes who led an outdoors anti-racism demonstration dubbed the March on UT Knoxville. University of Tennessee athletes from nearly every sport gathered around noon Saturday at the Torchbearer Statue at Circle Park, then marched peacefully in a crowd of more than a thousand people.

Almost every attendee wore a face mask to help stem the spread of the coronavirus, but social distancing guidelines largely fell by the wayside as the group of students, staff and community members marched down Volunteer Boulevard, turned onto Cumberland Avenue and scaled the hill to Ayres Hall. 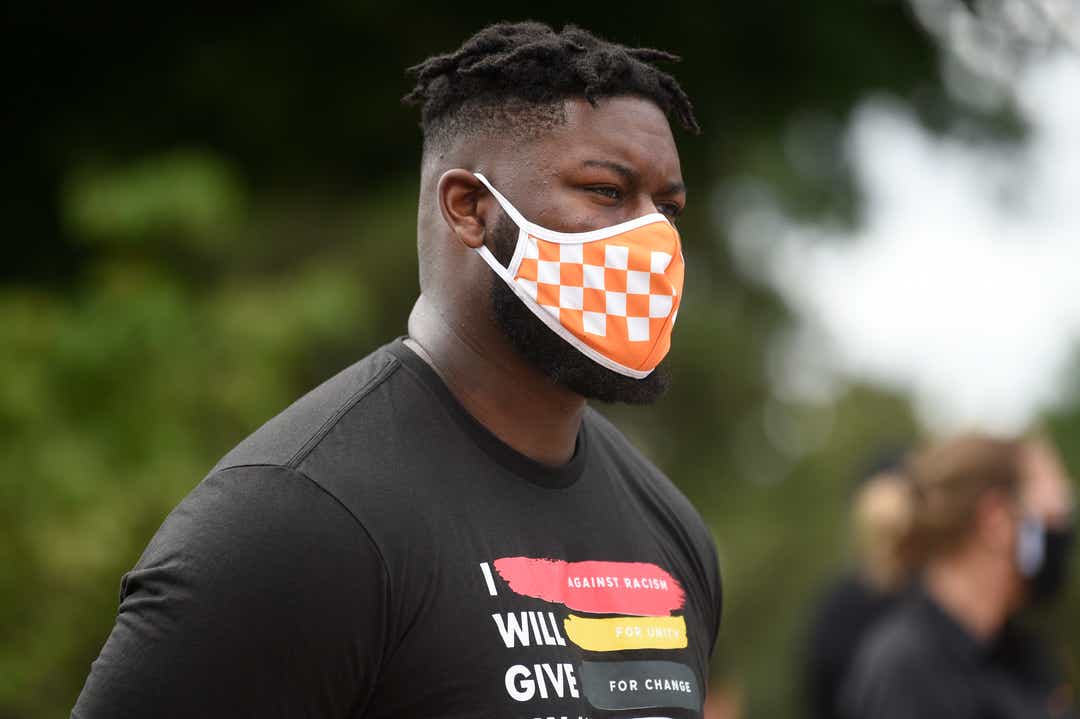 Trey Smith organized the demonstration along with Mariah Smith, Tennessee’s first Black golfer, and Vanessa Watson, a Black sprinter and hurdler on the track and field team. Watson, who spoke into a megaphone at the Torchbearer, condemned police violence against people of color and ran through a list of people — including Trayvon Martin, Alton Sterling and Breonna Taylor — who received death sentences, she said, for doing everyday activities while Black.

“Black people are not being killed for not complying with the law or for being disrespectful, or for even causing harm to anybody else,” Watson said. “We’re being killed every single day all over this world for trying to be ourselves.”

The march came one day after the 57th anniversary of the original March on Washington, where civil rights icons such as Martin Luther King Jr. and John Lewis condemned racial inequality from the steps of the Lincoln Memorial in Washington, D.C.

The demonstration also came six days after police in Kenosha, Wisconsin, shot Jacob Blake, a Black man, seven times in the back. A brief bystander video of the shooting went viral, leading to unrest in Kenosha and renewed protests elsewhere.

Many athletes in America’s professional baseball, basketball and football leagues, including entire teams, stopped playing or practicing this week in protest.

University of Tennessee administrators supported the demonstration. System President Randy Boyd, Chancellor Donde Plowman, Athletics Director Phillip Fulmer and head football coach Jeremy Pruitt all showed up at the Torchbearer. Earlier this week, Pruitt shifted Saturday’s practice so football players could participate in the march. Later, he announced he had canceled Friday’s practice altogether and put the preseason on hold due to “a few” positive COVID-19 tests among team members. 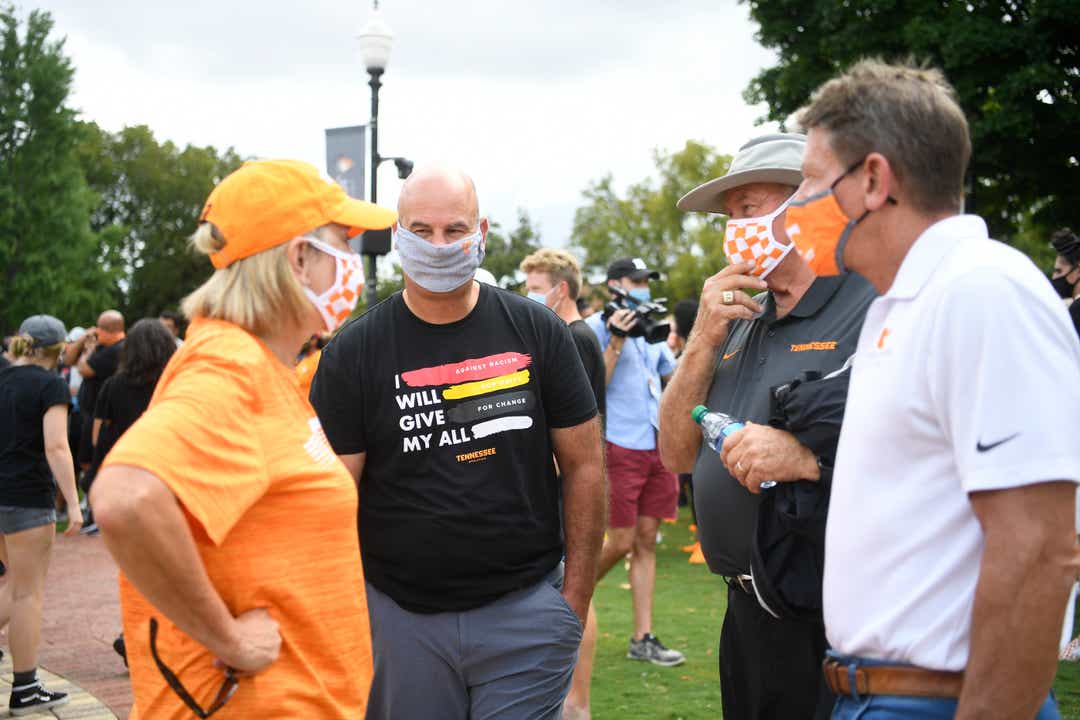 Some of the speakers at the march criticized the university’s record on issues of race. Karmen Jones, president of the Student Government Association, recalled past instances of students in blackface and hate speech on the Rock, a boulder that serves as the campus’ ever-changing message board. Now entering her senior year, Jones said “nothing much has really changed.”

“I want to go ahead and say that I love this university more than anything in this whole world,” she said. “If I didn’t, I wouldn’t be holding this office. I am thankful for the relationships that I have built with this university, but loving Rocky Top does not eliminate my criticism of the truth.” 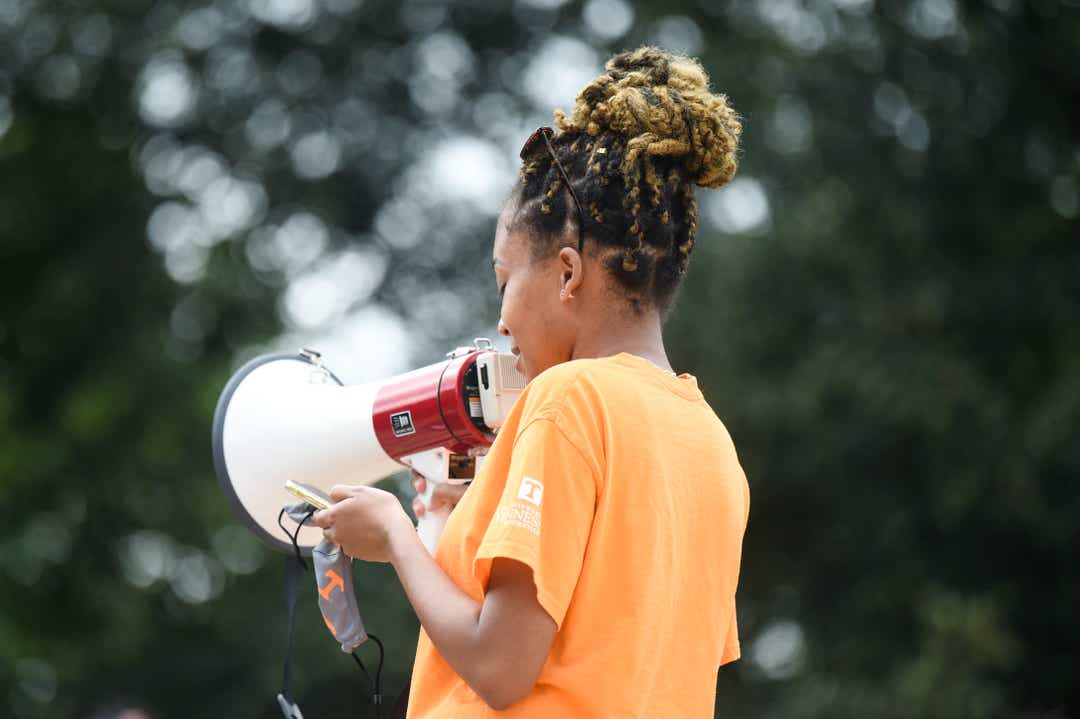 Jones said the university needs to get better at recruiting and retaining staff, faculty and students of color. She said administrators have been quick to crack down on students for violating the university’s COVID-19 guidelines — the university has suspended fraternities and threatened to expel students for throwing parties — but still have not implemented a “zero-tolerance policy for hate speech as a form of harassment.”

Football players Matthew Butler and Jordan Allen also spoke at the march, which marked the latest in a series of large peaceful protests in Knoxville since a white Minneapolis police officer knelt on the neck of George Floyd, an unarmed Black man, until he died. Hundreds of people marched through the streets of downtown Knoxville after Floyd’s death on Memorial Day. At another demonstration, in June, Pruitt joined about 10 Vols football players in taking the stage at a rally on Market Square.