Marilou Awiakta lived much of her childhood behind the perimeter fence of a top secret city in which every child knew she must never ask her neighbor, “What does your father do?”

But inside the fences of Oak Ridge, Awiakta felt a sense of freedom.

“This was the atomic frontier and the birth of the new world and secret and everything, (but) we were living the life of our pioneer ancestors in a sense,” Awiakta told Knox News, with “a small house, roaming woods, responsibilities you had to fulfill, and happiness.” 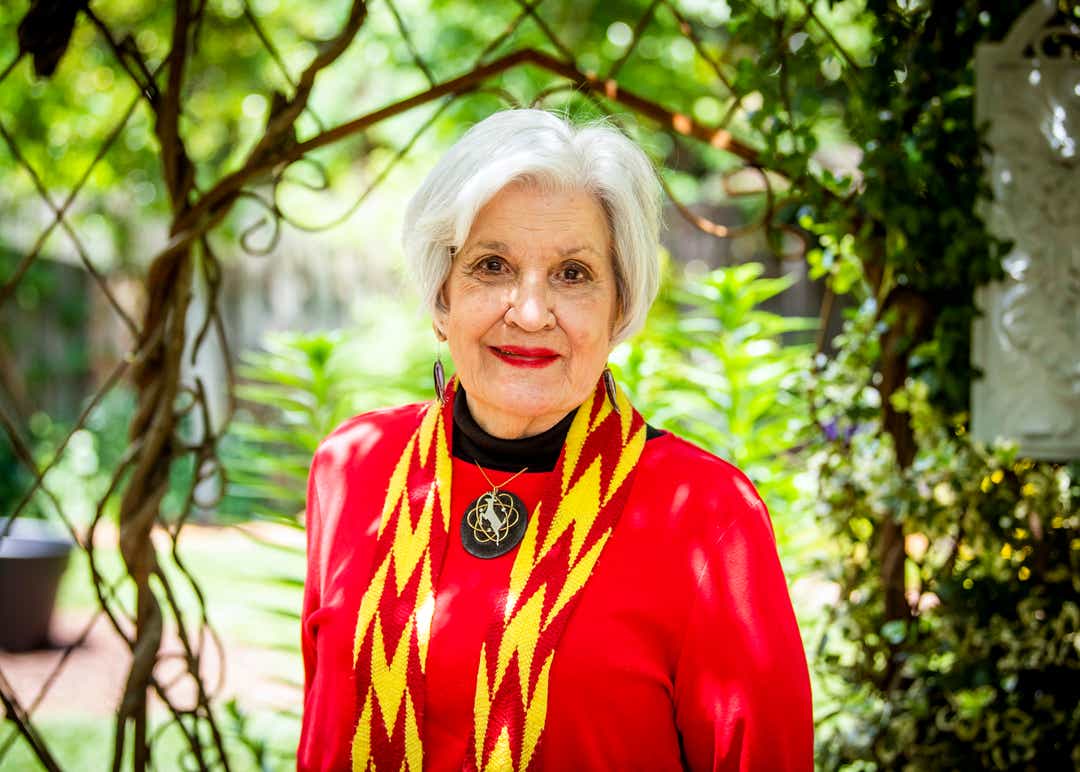 The world would grapple with the revelation that Oak Ridge, Tennessee, was the center of the Manhattan Project — the United States’ effort to harness nuclear power.

Her poetry, published around the world, reckons with “humanity’s dilemma,” — the atom and its power to hurt or to heal — through the lens of her Cherokee and Scots-Irish heritage.

Awiakta, 84, was named to USA TODAY’s Women of the Century list, recognizing the contributions of influential and innovative women in each state since the ratification of the 19th Amendment in 1920.

Childhood visits from the FBI 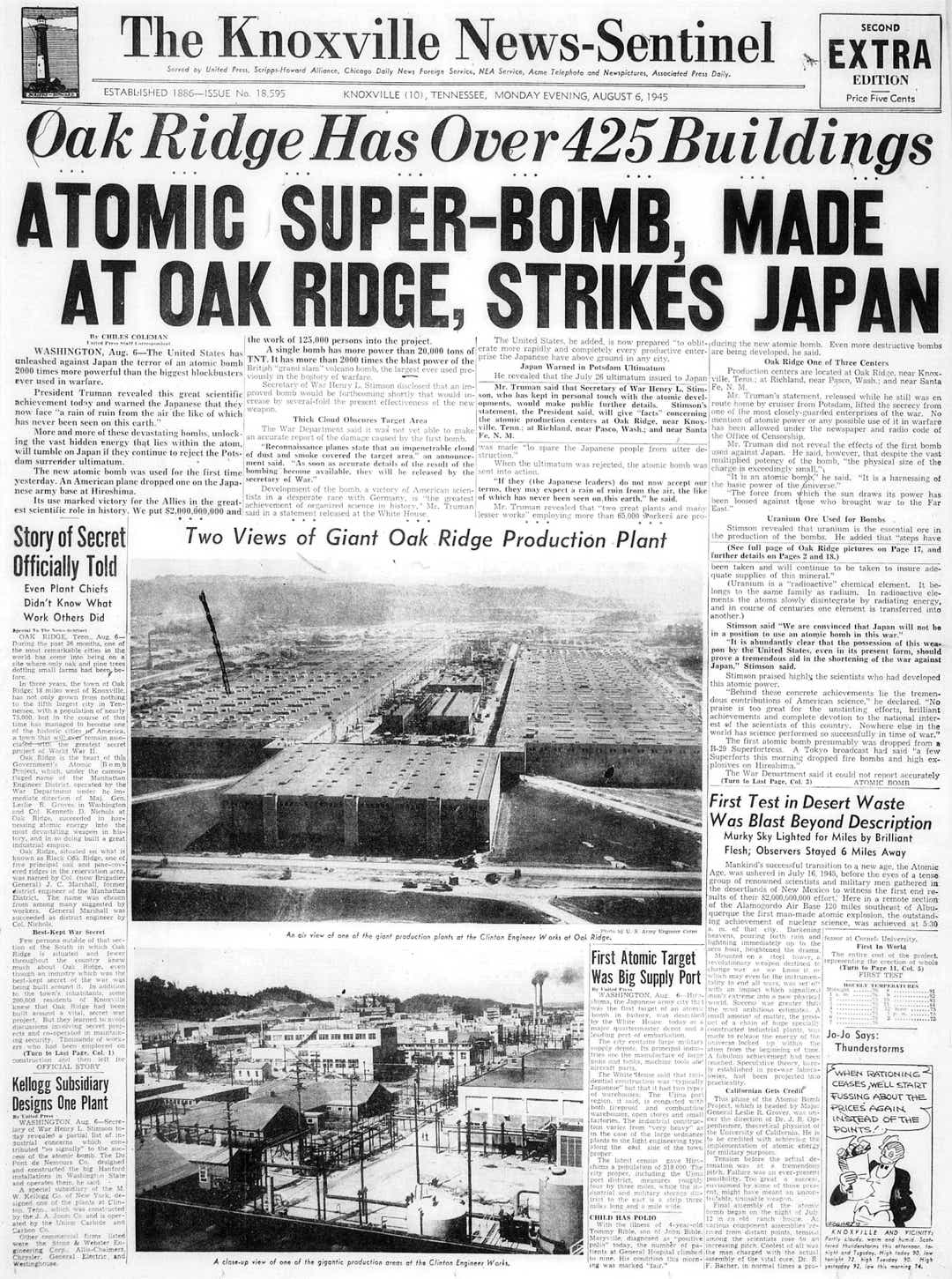 “Ancient haze lies on the mountain
smoke-blue, strange and still
a presence that eludes the mind and
moves through a deeper kind of knowing.
It is nature’s breath and more –
an aura from the great I AM
that gathers to its own
spirits that have gone before.

Deep below the valley waters
eerie and hid from view
the atom splits without a sound
its only trace a fine blue glow
rising from the fissioned whole
and at its core
power that commands the will
quiet that strikes the soul
‘Be still and know … I AM.'”

– “Where Mountains and Atom Meet” from “Abiding Appalachia”

Born in Knoxville in 1936 and a seventh generation East Tennessean, her grandfather gave her the name Awiakta, which means “eye of the deer” in Cherokee.

Her grandfather, of Cherokee descent, said she was observant and peaceful with a quick mind, just like a deer.

She adopted the name at the start of her mature writing career. Her personal emblem depicts Little Deer, the teacher of respect for nature in the Cherokee tradition, jumping into the atomic symbol.

At the start of World War II, Awiakta’s father began commuting from the paved roads of Knoxville to the dirt roads of the Oak Ridge, a city of absolute secrecy.

Though she didn’t know what her father did at the top secret installation, she dreamed of leaving their city apartment for a proper house in Oak Ridge.

“Mother said we’d go someday, in the fullness of time.
And when I was nine the fullness came,
exploding in a mushroom cloud that shook the earth.”

– A portion of “Genesis,” a poem from “Abiding Appalachia”

“Nobody could really get their mind around that kind of devastation,” Awiakta said. “It was devastating. And yet then there were waves of relief that ran through people, that this was probably the end of the war; and sons, fathers and brothers would be coming home. And then the horror of that many people being wiped out at one time.” 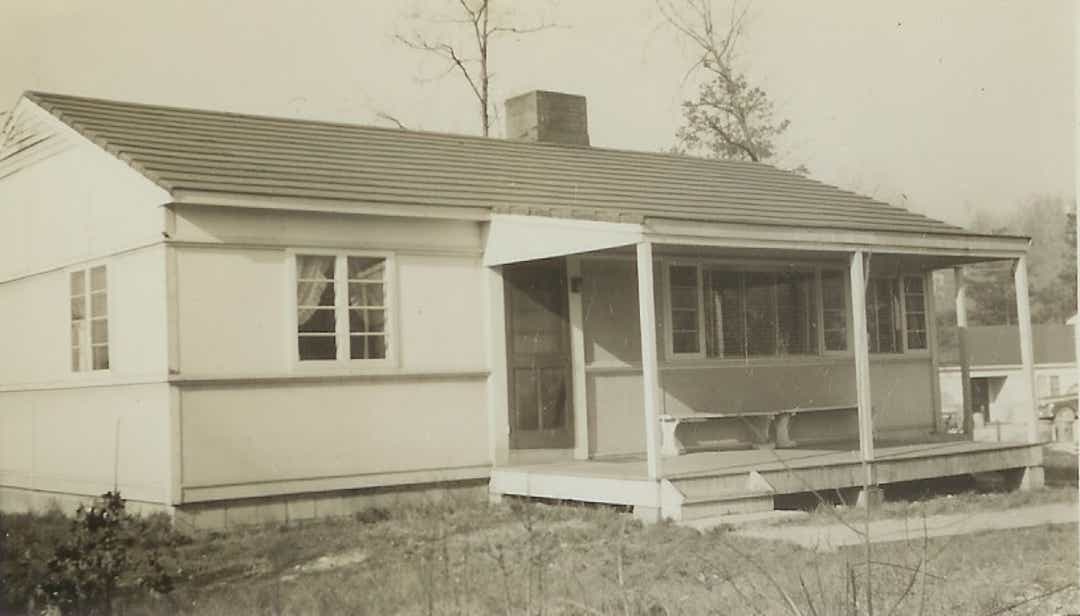 In her first book, “Abiding Appalachia: Where Mountain and Atom Meet,” Awiakta shares her memories of growing up in that house, picking blackberries, regular visits from the FBI to make sure neighbors were keeping their secrets, evacuation drills and wishing to play with a radioactive test cow.

“She’d like to be a friendly cow, I know.
But she’s radioactive now and locked
behind a fence. It makes sense to use
her instead of us. But does she care
she cannot share her cream with me
to eat on apple tart? And does she know
she’s ‘hot’ and dying? It hurts my heart
that I can’t even stroke her head
but as Mother said,
radiation’s just not friendly.”

Awiakta lived in Oak Ridge, other than semesters at the University of Tennessee, until she graduated and married Paul Thompson from West Tennessee in 1957. After living in France while Thompson, a physician, served in the Air Force, the family of five settled in Memphis.

After the Cold War, Awiakta finally got the answer to that question no child could ask: “My father, it turned out, was an accountant.”

Another view of science

Her work also joined the vast genre of science poetry, which confronts scientific discovery and its ramifications with metaphor and imagery.

“Abiding Appalachia” reckons with the question: Do human beings have enough respect for life to cope with the power of the atom?

In 1997, Awiakta toured the formerly top secret X-10 Graphite Reactor in Oak Ridge, which supplied plutonium to the Manhattan Project. The scientists, she learned, referred to the reactor as “a loyal lady,” which inspired one of Awiakta’s essays.

“She has a commanding presence even now. A mountain full three stories high. An altar, majestic, immense — with seven feet of concrete shield to guard the black body deep within. And across the front a thousand eyes that once were channels to her heart now stare stark and cold and dead. How awesome she must have been when the atom split with passion so intense it could destroy or heal ten thousands at a time …”

– An excerpt from “The Graphite Queen,” in “Abiding Appalachia”

Awiakta’s work gives science “a reality and an immediacy that the textbook lacks and speaks directly to the reader’s mind, and I hope, heart,” Lanier said.

The conclusions she reaches are rooted in respect for the balance of nature, one of the tenants of both her Cherokee and Scots-Irish heritage.

As a child, Awiakta was taught not to step on honey bees, for they’d no longer be able to do their part in nature. So too, did she consider that the atom offers the potential for healing as well as harm.

“If we treat (the atom) with respect, it has a blessing,” Awiakta said. “It can heat. And I’ve had cancer, so it can heal. I’ve experienced that.”

‘What will you do for the people?’ 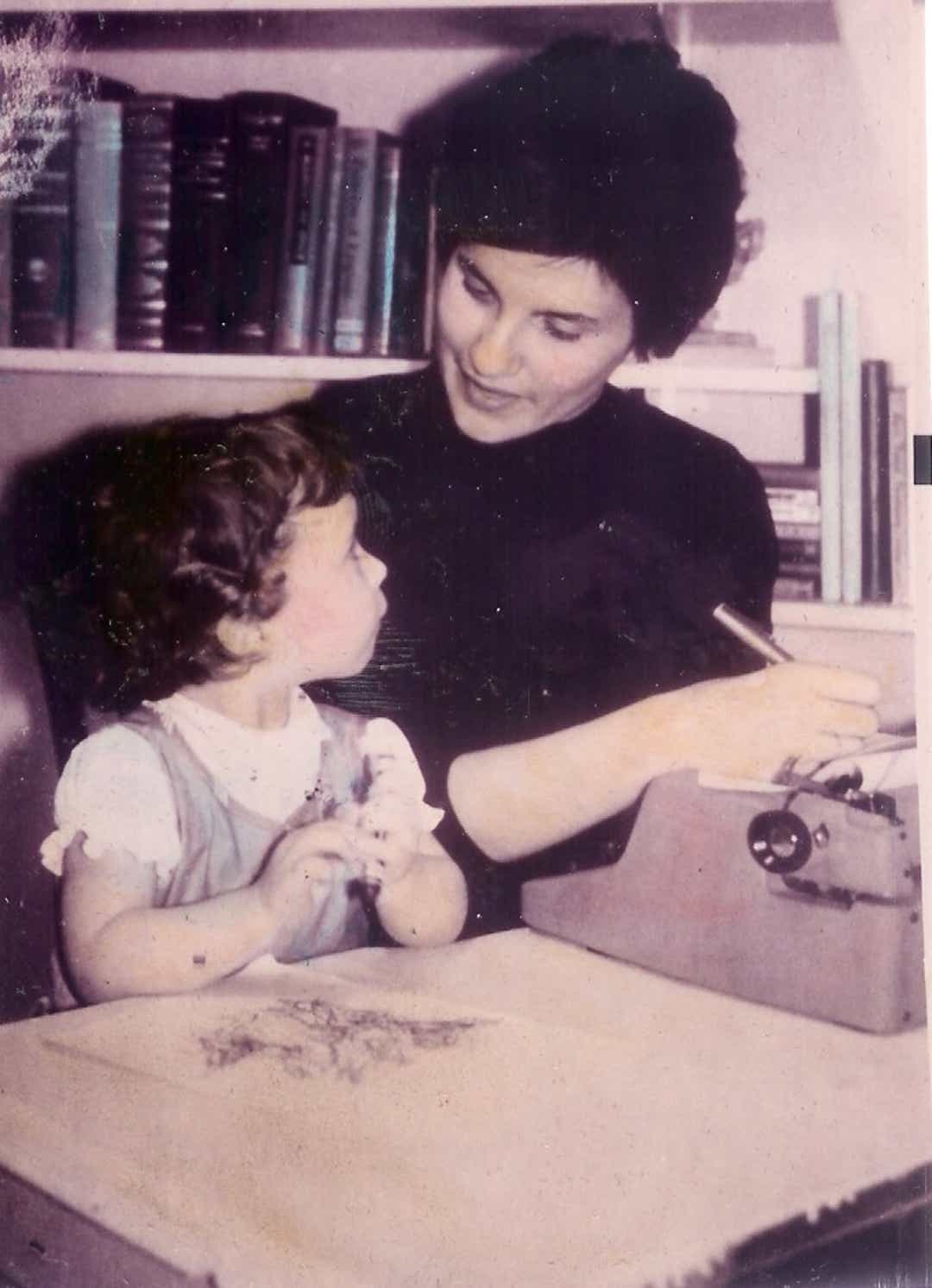 Awiakta was a small girl when she told her mother she wanted to become a poet.

Her mother replied, “That’s good Marilou, but what will you do for the people?”

It was a lesson she’s carried with her since: Art should be made for the good of the community, not just for art’s sake.

As a child, she crafted her first poem after a monarch butterfly died in the air and grazed her shoulder.

“Oh little butterfly, how I wish you weren’t dead, so you could fly with other butterflies instead,” Awiakta recited. She then, according to her mother, picked up the butterfly and set it on a nearby ledge.

“That, I think, is the theme song of my work all the way through to this day,” Awiakta said. “I’m sensitive to pain and preserving life and helping people relate to each other.”

That work is steeped in the desire to elevate Native American philosophy and belief beyond the scant history that appears in history books.

She explored Native American culture in “Rising Fawn and the Fire Mystery,” a novella about the true story behind the 1833 Choctaw Removal, and “Selu: Seeking the Corn Mother’s Wisdom,” a collection of poems and stories studying the Native American philosophies of democracy, equality, inter-connectivity and balance of nature as tools to make sense of modern life.

“Long before I learned the
universal turn of atoms, I heard
the spirit’s song that binds us
all as one. And no more
will I follow any rule
that splits my soul.
My Cherokee left me no sign
except in hair and cheek
and this firm step of mind
that seeks the whole
in strength and peace.”

– An excerpt from “An Indian Walks in Me,” a poem in “Abiding Appalachia”

Awiakta, who identifies as of Cherokee descent, has used her writing to advocate for civil rights for Native Americans and other diverse groups. She is a member of the Native Writer’s Circle of the Americas and co-founded what is now known as the Native American Inter Tribal Association, aimed at educating the public on Native American issues. In the late 1970s, she investigated the government’s seizure of sacred Cherokee land to build Tellico Dam in East Tennessee and helped establish the Sequoyah Birthplace Museum on its shores.

She has received the Appalachian Heritage Writer’s Award, the Award for Service to American Indian People from the American Indian Symposium and the Distinguished Tennessee Writer Award, among many others.

Today her poetry and essays are taught in curriculum across the country and appear in anthologies from MIT and the University of Alabama, as well as poetry journals in Belgium and France. The University of Tennessee Libraries are digitizing Awiakta’s papers as part of its Appalachian and Cherokee culture collection.

Awiakta, now 84, has remained in Memphis since her husband died in 2015. The author never learned to use the Internet — she was battling cancer during its rise and never got around to it — and spends time each morning quietly listening and thinking, an essential part of her creativity. 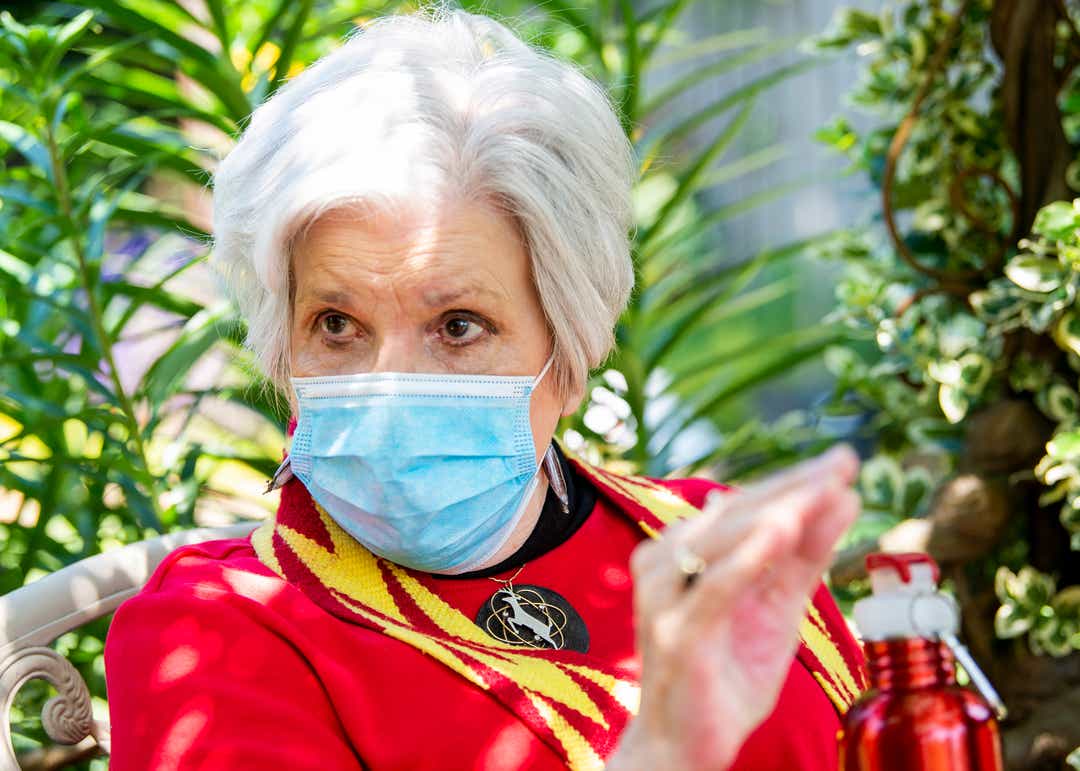 There are parallels, Awiakta observed, between the World War II-era of her childhood and a modern world in the grips of the COVID-19 pandemic.

“The sense that everything could end was very much with people,” she said.  Poetry can help heal the loneliness many are experiencing in isolation. It speaks directly to the heart.

“Our courage
is our memory.

Our courage
is our memory.”

– An excerpt from “Out of Ashes Peace Will Rise,” a poem in “Selu: Seeking the Corn-Mother’s Wisdom”

Brenna McDermott is a business reporter who can be reached at brenna.mcdermott@knoxnews.com. Follow her work on Twitter @_BrennaMcD.