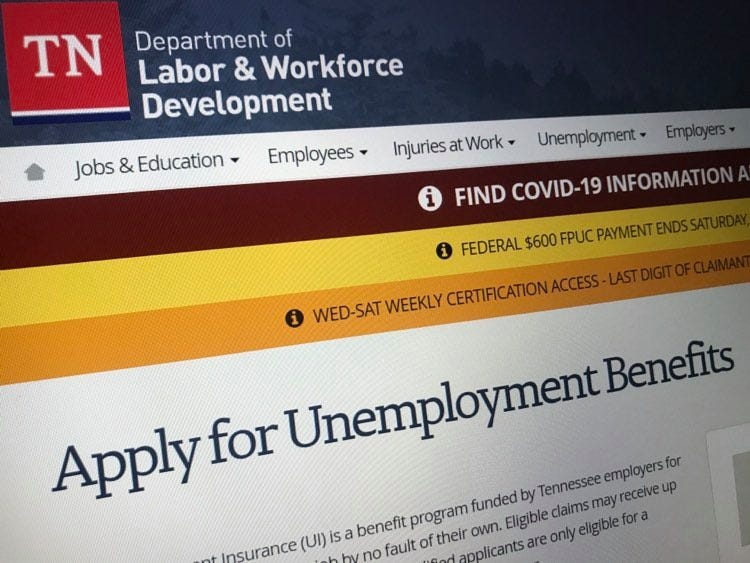 Tennessee’s unemployment rate dropped to 9.5% in July, according to preliminary calculations — a slight decline from the state’s revised June rate of 9.6%.

This news comes two days after state officials announced they are working to build a system that will allow some Tennesseans to receive an extra $300 in weekly federal unemployment benefits as thousands continue to file first-time unemployment claims each week.

Another 13,806 Tennesseans filed new unemployment claims the week ending Aug. 15, up from 10,036 the week before, according to the state department of labor. Since March 15, 795,116 Tennesseans have filed first-time claims. Of these, 204,726 continued their claims last week.

The state has seen a steady week-over-week decline in the number of continued claims since May, but the number of new weekly claims still far exceeds the roughly 15,000 claims per month the department processed prior to the pandemic.

Tennessee’s unemployment rate has dropped steadily since peaking at a historic 15.5% in April. The rate fell to 11% in May and dropped further to 9.6% in June.

Employers in Tennessee added 600 jobs between June and July, mostly in leisure and hospitality; business services; and manufacturing, according to the Tennessee department of labor. The state lost 160,600 non-farm jobs between July 2019 and July 2020, with the same three industries being the hardest hit.

Tennessee Department of Labor and Workforce Development Commissioner Jeff McCord announced Tuesday that Tennessee will apply for a federal grant program laid out in a memorandum by President Donald Trump. The program would allow eligible Tennesseans to receive an extra $300 per week in federal benefits, but there are caveats and some grant details remain murky.

The previous $600 weekly federal unemployment supplement came to an end on July 25, reducing Tennesseans’ weekly benefits to a maximum of $275, the state’s weekly benefit cap.

Tennessee department of labor spokesman Chris Cannon said the $112 million difference is due to the department clearing a large number of older claims during the week ending Aug. 8, including back payments for claims that still included the $600 federal supplement.

Nationally, 1.1 million workers filed new unemployment claims last week, an uptick after claims fell below a million for the first time in five months during the week ending Aug. 8. On a brighter note, 14.8 million Americans continued their claims last week, a drop from 15.5 million the week before.

The preliminary July unemployment rate for the United States is 10.2%, down from 11.1% the month prior.

What to know about the $300 federal weekly benefit

How much would eligible Tennesseans receive?

If Tennessee’s application for the federal grant program is accepted, eligible Tennesseans will receive $300 per week in addition to their current weekly unemployment benefits.

Trump’s grant program provides an extra $400 in weekly benefits, but $100 of that amount must be contributed by the state. Tennessee has decided to use the unemployment benefits it already pays to count for this $100 match.

This means the maximum amount eligible Tennesseans can receive each week is $575 (not including federal tax withholding) — a maximum of $275 under state benefits plus the $300 federal supplement.

To be eligible for the $300 weekly benefit, unemployed Tennesseans must qualify for a weekly minimum of $100 in state unemployment benefits from one of the following:

Once the program is in place, the state will automatically add the $300 extra weekly benefit to eligible individuals’ weekly payments.

How long does the program last?

The federal grant program is slated to run through Dec. 26, but could end earlier.

Federal grant funds for the program will be capped at $44 billion. The time frame of the grant depends on how many states participate and how many unemployed individuals in each state qualify to receive the weekly federal grant.

Once the $44 billion is exhausted, the program will end. McCord said current estimates show the program could run for five to six weeks in Tennessee.

Trump did not get Congressional approval to issue the grant, and it remains unclear whether such a move falls within Trump’s authority. The grant program could also end early if Congress passes additional legislation addressing enhanced unemployment benefits.

Is the payment retroactive?

Payments of the $300 weekly supplement are retroactive to Aug. 1.

Where does the money come from?

The $44 billion powering the grant will be issued from FEMA’s Disaster Relief Fund, which typically funds emergency responses to natural disasters.

Specifically, the funds come from the Stafford Disaster Relief and Emergency Assistance Act, which allows the government to provide assistance to people who do not qualify for traditional unemployment.

Because of this, unemployment experts and lawyers are unsure if states will be able to legally use their existing unemployment systems to pay out the benefits.

When can Tennesseans expect to receive these extended benefits?

It is not yet clear when unemployed Tennesseans will begin to receive these funds.

Tennessee will need to create a fourth unemployment system to process the supplements, McCord said, though the system will run from the same website and interface as Tennessee’s current systems.

McCord said the state department of labor is “working diligently” to “implement (the program) as fast as we possibly can.”

The department hopes to avoid the weeks-long processing delays it experienced when unemployment claims first spiked in March. Though the number of backlogged cases has declined since the start of the pandemic, several thousand people have yet to receive their benefits, some waiting months for payment.